Okay, so officially it isn't 'the Hamm Box' but the gentleman that has came up with it is named Robert Hamm.  It is called the NuBOX1, which makes sense, as it is a New Box camera, the only one around.
It is a 6x9 120 roll film box camera that will have interchangeable lens cartridges and even waterstop apertures.

I have had the pleasure of chatting with an Andre Domingues about this camera, who is the PR guy for the camera.
Although this isn't an interview, I'll make a quick rundown of this camera here..

First off, there is a Kickstarter (but it's actually beyond funded) however it is, as of the day of this post, still running with 21 days remaining.

The NUBOX1 is a really nice looking camera, which looks like it has been based off  pretty much any other Box Camera, however I like to look at it and think.. "Oh this looks nearly identical to my Agfa Shurshot B2 Box Camera."

That said, there are some stark differences. For one, it's modern, a bit better built (not made of cardboard) and looks really well designed.

Sure, there may not be focusing on this camera, unlike the Zeiss Ikon Tengor, but which one survived in design? Not the Tengor!

Now, why a box camera, you might ask. Why not a 35mm SLR, or a 120 TLR or something else like that, well, baby steps.
HOWEVER think about this, one of the best selling cameras today right now for people getting into film photography, is a Holga. Well maybe not, but they are hugely popular and incredibly versatile, albeit basic, cameras. That said, I shoot with a box camera on an off and on basis. Sometimes I just want to go out with a camera and not worry about focus and adjusting the shutter and aperture and just shoot... compose, shoot, walk away. A perfect solution is a Box Camera!

I have done a lot with my box camera. Well, not exactly a lot, but a fair bit of things, from snapshots, landscapes with a polarizer and even Infrared film!  Yes, I shot IR (well sorta IR) in my Box.
Ilford SFX200, which is pretty darn close to IR with similar effects.
The way I did it was actually kinda fun. I pulled the 'aperture' lever, which also has a 'yellow' filter on it, held down the shutter release for a 'set time' and released. Other times I just clicked the shutter multiple times...

This method did work! I just didn't have a tripod socket on the camera, so I had it basically completely level and there wasn't much I could do from there.

Maybe the NUBOX will have one? Then again, it shouldn't be too hard to glue one on with some Epoxy if they don't... it's getting it to suit and match the camera that might be the hard part.

But you can see in the image, left, and the images above that the cameras are very very similar in design. But then again, many box cameras are exactly the same. A single element lens, two composition windows and a lever on the side.

So why a box camera, for one, they are extremely inexpensive to produce and are very good cameras to use. You can easily customize them for your liking.

But still, why a box camera? That's a good question.. I know that Bellamy Hunt (Japan Camera hunter) is designing a 35mm camera, although it is probably going to be an expensive point and shoot style camera. There are other 35mm SLRs that were kickstarted, but they are all extremely expensive.

Let me put this into perspective, a 35mm SLR that was on kickstarter you would have to pay 350 British Pounds to get one with a choice of what mount to use.
That is a huge chunk of change... vs the $80 for a Box Camera (you do the math).

Sure, there are other Box Camera options that are 'pricier' but I mean, I backed the project and I went with the top choice. Less than 200USD shipped.
WHY did I go that route and not the lower priced one?  Well, you see, it has a leatherette cover, but it's made with a synthetic leatherette and not one that is derived from any animal sources, which for the simple fact of a massive Vegan movement (yes I am part of that, along with many other fellow film photographers) it has opened up options for other shooters that would not have purchased a camera with a leather skin attached.

I went with that model to show there is a demand for that kind of alternative product. If we don't vote with our dollar, the status quo stays the same.

But a BOX camera... For me, it's a no brainer. I've rolled Velvia50 in my Box.. I've rolled Tri-X... SFX200 and have been planning on rolling Kodak Ektar through it as well... It's a perfect solution for just shooting and enjoying photography without breaking the bank.

There are some key features of this NuBOX 1 that I think are very impressive.  For one, sure, a lifetime warranty. Well, sure, meh... it's a box camera... after 90 years, my Box Camera still works as it used to, except the shutter lever is a little stiff..

Okay, so let's do a run down on the options;

Interchangeable lenses - Wide - Normal - Telephoto
Aperture Stick - Basically water-stop sticks that will 'stop down' the lens, but you just shove them into a hole on the top of the camera. This is good for fast film...
1/200s shutter. Yes, that's right!  That's a nice fast shutter, which means you can shoot 400 speed film in there with the ƒ/16 stick and have very good results, unless you're closer to the equator than I am, then you might need the ƒ/22 stick or a filter on the lens.
Plus... this isn't no plastic element hope it's sharp kind of lens,  it's a high quality optical glass lens! It's designed to give you the best results without costing a fortune!

So let me guess... Well, it's all great that there are some excellent options that come with this camera, but ... what about image quality?
Okay, so lets get started... 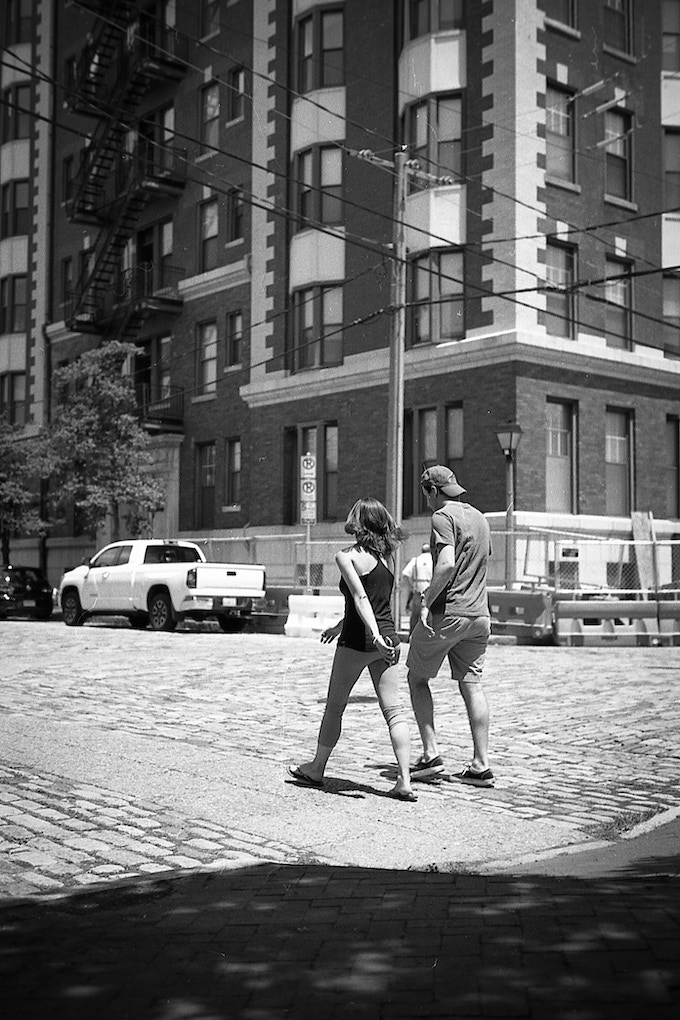 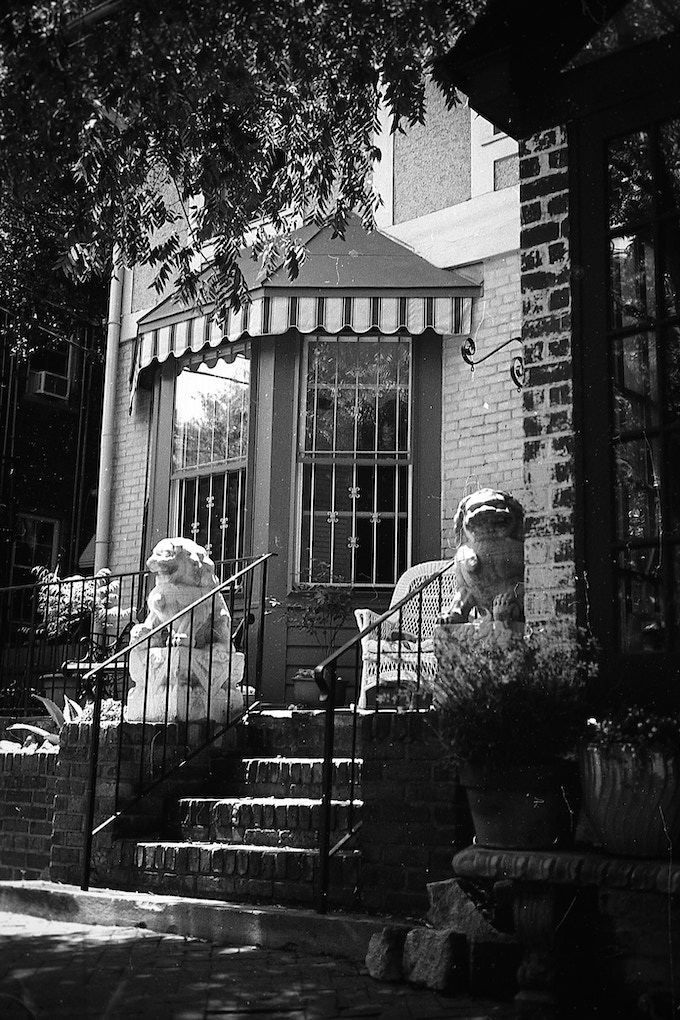 The camera is capable of producing some excellent images and I believe that this will be a great addition to anyone's collection of camera... especially as an everyday shooter!

I think everyone should own and shoot with a box camera. I'm not saying every single day, but you should be out with a box camera at least once or twice a year just to shoot. To enjoy photography in its simplest form.
The best part of this, everyone that is into PINHOLE photography makes a box camera. That's how simple they are and how wonderful they are... Box Camera designs are the most basic, yet the most versatile!

Considering that pretty much every single modular camera out there is basically just a 'box' with a lens and film back.

Bronica.. Hasselblad.. Mamiya.. Sure the optics are way beyond what you find in a box, but considering the price tag of many of those lenses, that's a lot of Box Cameras.. hahaha!!

So if you haven't already backed it, even if it is already 100% backed, you can still get in on it and get yourself a brand new box camera with interchangeable lenses.

Until next time everyone, keep those shutters firing!

All images are copyright and images of the NuBOX1 are used with permissions from Hamm Camera Company. Images may not be used or redistributed without permission.